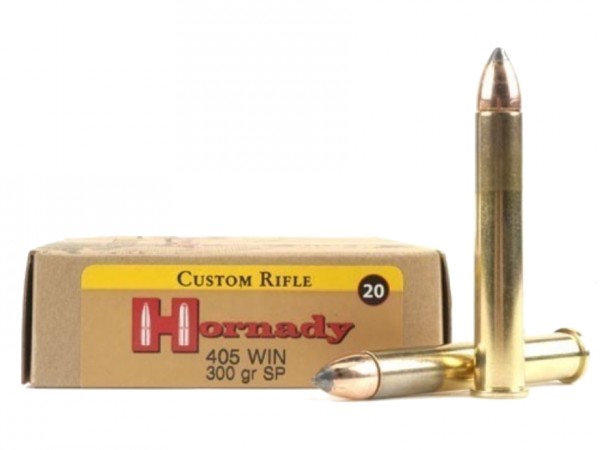 The first thing that probably comes to mind for most hunters familiar with the .405 Winchester is President Theodore Roosevelt and his famous use of the cartridge during his 1909 African Safari. While he did indeed use a Winchester Model 1895 rifle chambered in .405 Winchester with great success on a number of African big game species, there is a lot more to the story of the cartridge than just Roosevelt’s hunt.

In today’s post my dad will go over the history of the .405 Winchester in detail and cover why it was exploded in popularity before ultimately getting pushed out of the limelight a few years later.

Note: some of the links below are affiliate links. This means I will earn a small commission (at no extra cost to you) if you make a purchase. This helps support the blog and allows me to continue to create free content that’s useful to hunters like yourself. Thanks for your support.

The .405 Winchester was first introduced in 1904 chambered in the classic Winchester 1895 rifle. The legendary gun designer John Browning built the Winchester 1895 around a box magazine and a very strong action lock up so that it could utilize pointed bullets and the more powerful calibers designed to use the new smokeless gun powders.

The first mention of the 1895 rifle was in the Winchester Repeating Arms 1896 catalog. The rifle was first chambered in the black powder .38-72 and .40-72 Winchester calibers. However, what really caught the eye of hunters at the time was the fact that the rifle was also available in the brand new .30 US Army (aka .30-40 Krag) cartridge. The .30 Army was one of the first commercially available cartridges that utilized smokeless powder and sportsmen of the day were amazed at the enhanced killing power and flat trajectories obtainable with the new wonder powder.

As impressed as hunters were with the .30-40 Krag, they got even more good news when Winchester introduced the .405 Winchester (aka the .405 WCF) in 1904. Also loaded with smokeless powder, the original Winchester .405 load propelled a 300 grain round nosed bullet at an astounding 2,200 feet per second (3,225 foot pounds of energy)!

Especially when compared to other loads of the day like the .45-70 Government (405 gr bullet at 1,350fps for 1,639 fpe) or the .50-110 Winchester (300gr bullet at 1,600fps for 1,706fpe), the .405 Winchester offered a gigantic leap forward in performance for hunters who wanted a hard hitting and flat shooting cartridge. Interestingly enough, the .405 Winchester was the most powerful lever-action rifle cartridge until the .444 Marlin came along over 50 years later.

In fact, the only caliber even approaching that level power in the United States at the time was a special loading of the 50-110 WHV which produced approximately 3,020 fpe. However, this was a special high velocity loading using a very light bullet which gave poor penetration in big heavy boned animals due to its poor sectional density.

After its introduction, the 1895 rifle and .405 Winchester cartridge quickly became very popular among American hunters. Winchester followed up on the success of the cartridge by offering it in their Model 1885 single shot rifle. Remington also tried to capitalize on the popularity of the .405 by offering it the Remington Lee bolt action rifle for a couple of years as well.