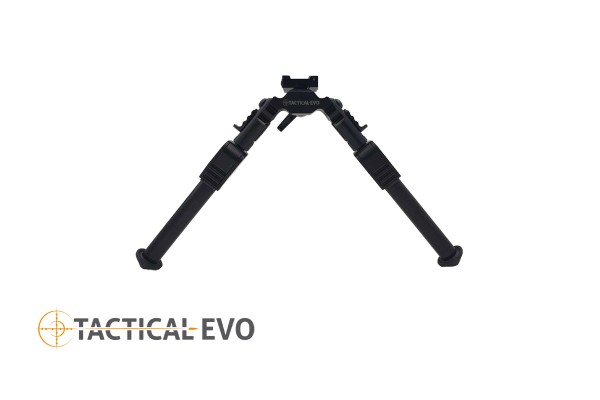 Bipod Tactical PRS is a great choice for every police, army or sports shooter of tactical disciplines PRS, but it will also serve other shooters who prefer 100% quality.

The Bipod has been tested in the most extreme conditions that cannot withstand half-baked solutions and is designed for both sports and business use.

Bipods are easily adjustable in all axes and allow precise and stable adjustment of the point of view with regard to the current needs of the shooter. The patented horizontal pin locking system then ensures that the bipod does not come loose, even when firing with larger calibers. The legs have a 4-stage system of jump extension and excellent torsional rigidity is ensured even when fully extended.

Everything is as precise, constant and accurate as possible, ie exactly as required to perform combat or tactical tasks. Precision processing and innovative technical solutions are what many competing products lack. And all this with a total weight of only 395g / 0.870 lb.

The bipod is made in the Czech Republic and the surface treatment is made of black anodizing.

In contrast to similar competing products, the Tactical PRS bipod also has the option of easily exchanging WEAVER / UIT / MLOK / KeyMOD / SPIGOT clamping systems, etc. The bipod can therefore be used on multiple weapons with different clamping systems without any complications. Replacing the clamping system with another is very fast and does not take more than 20 seconds.

The bipod is fitted as standard with rubber feet of our design, which have an M5 thread, so it is not a problem to unscrew them and replace them with, for example, winter spikes for use on snow and ice.

Made in Czech Republic